The longest continuously inhabited part of Hong Kong there has always been some type of fishing community on the island. Pictured here in 1919 a vibrant fishing fleet has always had some degree of self sufficiency and community spirit. 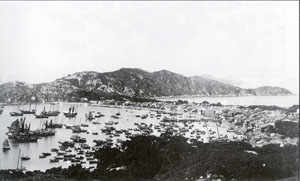 c. 1000 BC - Rock carvings of unknown meaning were caved on a rock, now visible on the slope below the Warwick Hotel

1777 - Plague hits the island but is abated when the residents parade a Pak Tai image through the streets.  Celebration of this event became todays Bun Festival.

1783 - Pak Tai temple originally constructed just next to the sea as this temple to the God of the North must always see the sea to be the protector of fishermen. While reclamation has meant that it is no longer next to the sea the view from the tmple is still unobstructed.

1920s - As colonial expatriate population of Hong Kong grows there is an interest in Cheung Chau as a place for holiday homes, and many buildings were built on the peaks for vacationing european families.

1998 - The Mini-Great Wall was built on the south east coast with pavilions giving grand views over the sea.

A lot of people come to Cheung Chau specifically for the food, and there are indeed a range of traditional and modern choices. As a historic fishing village it is of course very related to seafood, fish and marine products. Here you will find a full range of seafood dishes, but also traditional Hong Kong Cafe fare, Cantonese Dim Sum and international choices as well.

Catering to the large number of visitors who are coming to Cheung Chau for a seafood lunch or dinner there is a stretch of seafront with many seafood restaurants. Each one has tables by the sea as well as some indoor seating. Focusing on providing food for visitors it concentrates on rustic and traditional Cantonese presentations of seafood. Try a steamed fish with ginger and spring onion, stir fried little clams with chili, crispy deep fried squid or steamed garlic prawns. Typical accompaniments such as plain or fried rice, beef and broccoli stir fry and sweet and sour pork make for a complete meal and cater to those who do not like seafood.